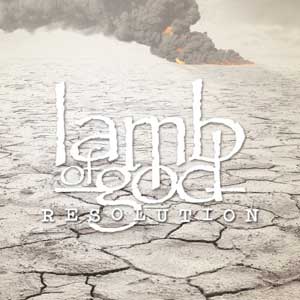 With Lamb of God’s new album, Resolution, due out on Jan. 24, guitarist and Jackson signature artist Mark Morton recently discussed the origin of the title with Metal Shrine alongside vocalist Randy Blythe.

“The thing is… it’s not that titles haven’t come from the other guys ever before, because they have, but Randy and I write the lyrics so a lot of times, unless dudes are paying attention to the lyrics, more or less we have like a theme that we’re talking about,” Morton said.  “It’s almost like pinning the tail on the donkey. If they just come up with an album title out of the abstract, it doesn’t necessarily apply. I think that was our big argument this time, was that ‘Resolution’ really kind of relates to a lot of the themes and things we were writing about.

“Be it clarity, like resolution first and then clarity or being the finality of a phase or the end of a conflict and a new beginning or something. Or just having resolved or having the determination to see something. All those are parts of the themes and the things we were writing about. My idea for it came from a line in a really old song of ours called ‘Ruin,’ and there’s a line that I wrote that says, ‘This is the resolution’ and at that point of time it was about knowing that I was never going to do this particular thing ever again. I think that idea popped up again.”

Bassist and fellow Jackson Signature artist John Campbell had high praise for the collection of 14 tracks on Resolution.

“Well if you think about it logically, we have been for a long time so we’ve got better at doing this,” Campbell told Metal Obsession. “But it’s ah, we’ve learned lessons along the way that we’ve actually used, and when bringing out a new record, we’re not interested in bringing out the same record we did before. To stretch and try new things and try to evolve as a band has always been what we’ve aimed for when we’ve gone to write and put out a new record.

“But what makes it better? Specifically, I couldn’t really put my finger on it, but being very involved with all the recordings we have done, this is my absolute favorite and most challenging group of songs we’ve put together.”

As the release of Resolution closes in, the Virginia metallers dropped a third crushing video trailer and song tease.

The one-minute clip features “King Me,” which is the final track on the album. Impressively, it also features a full orchestra and opera singer Amanda Munton.

“Resolution” was recorded at various studios in Virginia and New York with producer Josh Wilbur, who worked on the band’s 2009 effort, Wrath.

View the trailer below:

Resolution is currently available for pre-order in the United States and Canada, while fans can already purchase the song “Ghost Walking” via iTunes by clicking here.

Lamb of God currently has a host of tour dates scheduled for 2012. For more information, visit the band’s official website.