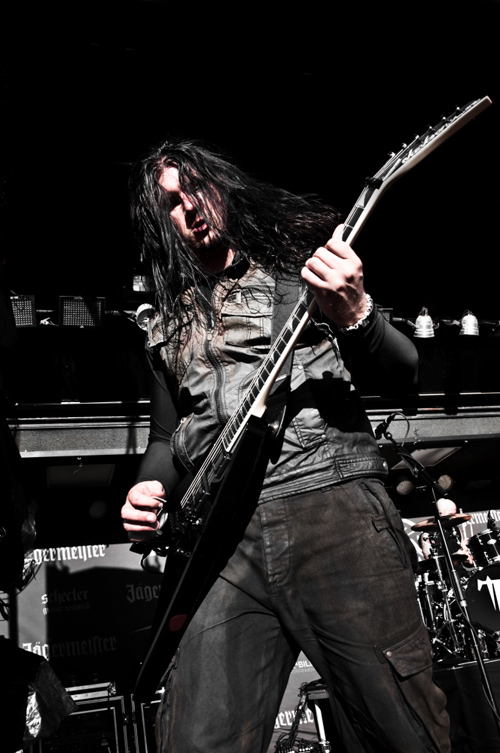 With a new album ready and on the way, Trivium has a big end to 2013 planned.

And the band couldn’t do it without the shredding stylistics of guitarist Corey Beaulieu, who had a brand new signature Jackson model see its release this year.

For those thrash-heads out there, Beaulieu offers up the latest news on his band’s upcoming record — produced by Disturbed frontman Dave Dramain — and his new trademark axe.

JacksonGuitars.com:  What are some of the features you love about your new signature Jackson guitar?

Beaulieu:  I’ve used my new signature guitar for the last few months as my main guitar, and it held up.  I never had any problems with all the traveling and playing.  It took a beating, but it held together.  And, I still play it at my house when I’m just messing around.  No matter how much abuse you put it through, it still plays and sounds amazing.  It’s just a beast of a guitar.  It never got to that point when you were like, “Oh man, there’s something wrong.”  It’s the original prototype that was the grandfather of the design.  It’s going to be retired from touring and be my buddy at home that I play.

JacksonGuitars.com:  On social media, fans have been clamoring for your signature model.  How does that make you feel?

Beaulieu:  It’s funny.  A lot of fans play instruments.  They might not play guitar, but they’re savvy and curious about what kind of gear we use.  And whatever we use, it seems like our fans gravitate towards that stuff.   Maybe it’s not our specific guitar, but the brand, in general.  Especially over the last couple of years, since I’ve been working on a signature model with Jackson, people were interested in it.  Total Guitar did a piece on something that never even came out.  It’s been crazy to see the feedback.

And it’s cool to get instantly plugged in to your fan base and who would be interested in the Trivium guitarist.  The feedback is great.  I think people love it, and there’s not a lot of seven-string B guitars out there, too.  Just the other day, I heard from one of the first fans who actually bought it and sent me a picture.  He said it was the best guitars he’s ever played.  He was from Norway, so that was pretty great.

JacksonGuitars.com:  What is the status of your follow-up to In Waves?

Beaulieu:  It took a little bit longer than it should of, just because of schedules and the fact that we had to switch mixers.  But we’ve finished mixing the last songs, and now we’re mastering the record.  It’s pretty much finished on the music side of things.  Then, we’ll have to do the art and all that, but the actual CD is in the can, and that’s good.

Beaulieu:  We’ve known Dave for quite a while.  We actually met him in 2005 when we were on tour with Danzig.  Dave was at the House of Blues in Chicago, and he liked what we were doing.  We’d see him here and there throughout the years, and what really got the ball rolling was the last record.  We gave him a copy, and a couple of days later, he came up to us and told us how much he loved it.  About a month or so later, we were coming through Austin on tour with Dream Theater, and he invited us to his house.  He said he wanted to be a part of our next record and gave his thoughts on where he thought we should go.  He understood what the band was all about, and he had some ideas about what we could do.  We’re a band that is more than capable of playing anything we could think of, so he wanted to be a part of it.  It sounded really good, because we’ve never worked with someone who has been through the whole process as a musician — recording and everything that goes along with it.  We thought that his experience could help us make a big record.  We didn’t even talk to anyone else about it.

Over the course of a year and a half or so, we’d always be writing demos, and every once in a while when we had songs that we felt good about, we’d email him.  He wouldn’t send too many notes, but there were little things here and there that would get us thinking about some different ways to approach the record.  It kept if fresh and exciting.

JacksonGuitars.com:  In a recent interview, Dave said this album could be a defining moment for your career.  What do you think about that?

Beaulieu:  There are so many sub-genres that everyone gets so worked up about.  A lot of the new music that comes out, there are songs and hooks that can go in so many different directions.  The whole point was to make a big, intense, catchy record — that classic mentality of big songs, big hooks.  And also being aggressive while having a melodic hook over the aggressiveness.  Basically, not being that teeny-bopper, cliché, heavy-metal stuff that is all Hot Topic-y.  There are riffs and grooves, where you want to head bang and rock out.

Matt’s voice has gotten so strong, too.  The whole vocal performance of this record is just on another level from where we’ve been, and it puts a whole other level of emotion into the songs that you don’t get with flat-out screaming all the time.  There is a presence in the voice, with a hook, while being angry.  We’re really excited, because it kind of sets us apart.

JacksonGuitars.com:  So can we expect a guest vocal part on the album from Draiman?

Beaulieu:  It popped up at one point, like maybe or not.  But, it was a thing where he said, “Let me be the producer.  The album should be on you guys.”  He might not have actually sung on it, but his fingerprints are on it.

JacksonGuitars.com:  Can fans that see you in the coming months expect to hear new songs?

Beaulieu:  Once we do the festivals in August, we’ll have a few tracks we’ll play.  There will be the first Internet track, and then a song that we’re doing a music video for.  We don’t like to play anything live until people have actually heard the recording.  Then, they can hear it properly instead of a cell phone recording that is all blown out.  Once the record comes out, we’ll definitely be playing a bunch of new stuff, like we usually do.

Trivium is going to be on the road this fall.  Check out their official website for a full list of dates.